A morning tea was held at Toc H Queensland’s Coungeau House on Bribie Island on 30th January to thank all those who have supported the management committee of Toc H Qld Coungeau House during the past difficult year when the facility was closed. In particular Moreton Bay Regional Council was acknowledged for the grants provided to construct a ramp, refurbish the house, install solar panels and air-condition the hall, in addition to providing a loan to refurbish the Ian Fairweather Cottage. Mayor Flannery and Councillor Brooke Savige were in attendance.
​
The National Director of Toc H Australia Dr Owen Nichols then surprised everyone, particularly the recipient, by presenting the Governor-General medallion for service to Toc H during 2020. The Governor-General and Mrs Hurley would normally host an Open Day in Canberra to acknowledge those organisations of which he is Patron. Due to Covid-19 restrictions, the Governor-General awarded a medallion to a worthy recipient in each organisation. Christine Clark was chosen from all Toc H members in Australia to be the most worthy recipient for her untiring efforts in restoring Coungeau House, The Ian Fairweather Cottage and the grounds of 36 Banya Street, Bongaree. Chris has been a member of Toc H Bribie Island Branch for over 20 years, following in the footsteps of her mother, Heather Dyer, a long time member of Toc H Bribie Island Branch and Chair of the Toc H Qld Coungeau House Management Committee for many years. Christine’s family and friends were there to share her well-earned achievement. All work undertaken at Coungeau House is voluntary and Chris has put in 8 hour days during 2020 building, painting, establishing new gardens, laying concrete, moving sheds and the list goes on. This was in addition to her role as Interim Caretaker maintaining bookings, cleaning, co-ordinating tradesmen and all the sanitisation and record-keeping that Covid-19 required.

Coungeau House is a holiday home for the disabled and disadvantaged in our community. As one response from an attendee on the day noted: Toc H has a motto: Service is the rent we pay for our room on Earth...the service and kindness Chris has extended to all she has met over the years with Toc H will have been appreciated by so many and will continue so for many years to come as she works tirelessly for the needy, disabled and disadvantaged in our community. 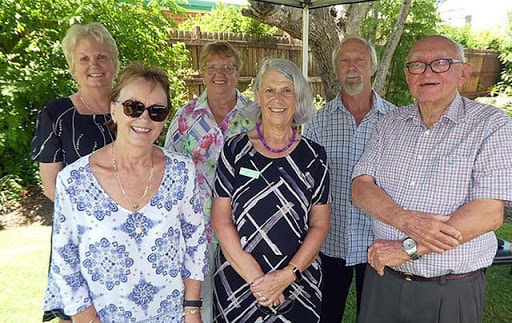 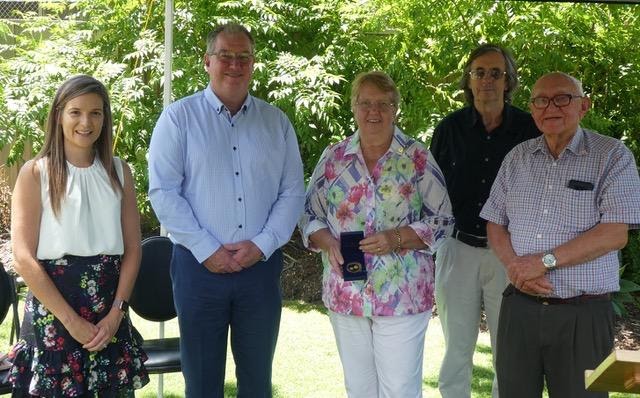 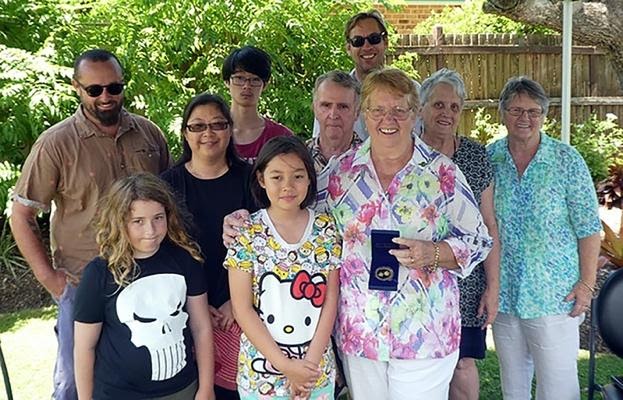 Most Toc H members would be familiar with one of the murals on the Maryborough Military History Museum – it is on the opening page of our website, with a link to a detailed article on the mural, which recognises our Movement’s founder, the Rev. Dr. P.B. Clayton – ‘Tubby Clayton’. The location of the mural is quite appropriate; our Movement grew out of World War 1, and the Museum is the largest private military history museum in Australia, with an outstanding collection of memorabilia and interpretive material dating from the Boer War to the present. Also, Tubby Clayton was born in Maryborough and although he spent most of his life in the UK, he regularly returned to the city, and is commemorated there with a plaque in St Paul’s Anglican Church, and a statue of his dog Chippie in Queen’s Park.

The Tubby Clayton mural is one of four on the wall of the museum, and together they are part of the Maryborough Mural Project, an excellent initiative designed to promote tourism in Maryborough. The other three murals on the museum depict the battle of Long Tan, Uncle Wilfie (a local Butchulla Aboriginal man who served on the Kokoda Track during World War 2), and Frank Lawrence, a Lancaster pilot who flew missions in Europe and, at the end of the war, food drops to the starving Dutch citizens. Together, the four murals provide appropriate and very moving recognition of local Maryborough identities.

However, there had never been a formal unveiling of the murals, so this was organised by the Maryborough Mural Project, in conjunction with the museum, and took place on Thursday 25 th February. Speakers included Elizabeth Lowrie and Deb Hannam, who founded the project, Museum Director John Meyers, members of the families of Uncle Wilfie and Frank Lawrence, while Toc H Northern Region Director Ray Geise provided some interesting background on Tubby Clayton, drawing on his memories from when he served as Tubby’s ADC in London in the 1960s. The formal unveiling of the murals was conducted by Maryborough Mayor George Seymour.

Eight Toc H members attended including Mark Greenacre, who came all the way from Sydney, as well as five members from Brisbane and two from Bribie Island Branch. All agreed that it was an excellent day, and a wonderful opportunity to learn more about Toc H’s links with Maryborough and our military history, as well as meet locals who have links with Toc H. Discussions have commenced with the local Mayor and others, and it is hoped that Toc H can undertake projects in the area to help address local needs in the community. 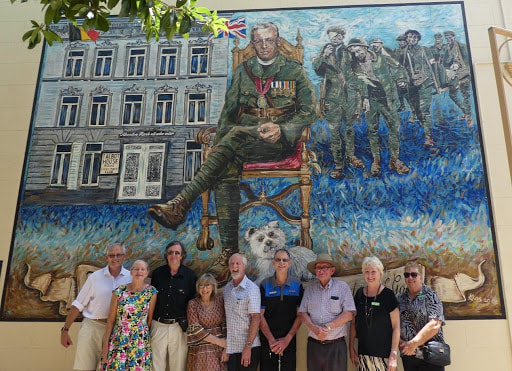 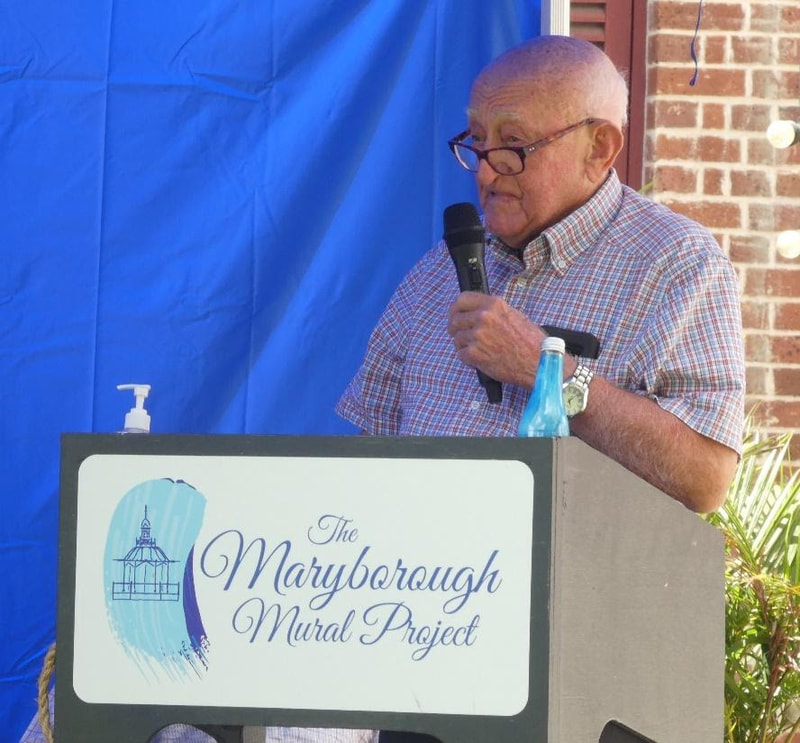 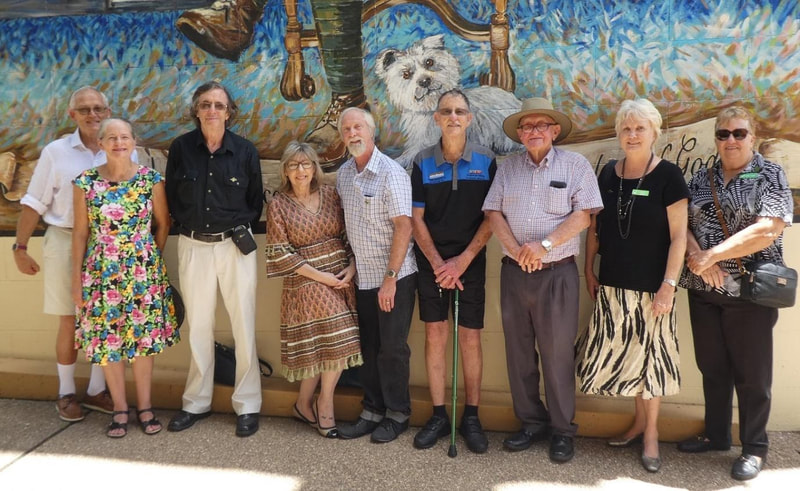 TBA
For details of other upcoming events, see the Northern Region and Southern Region websites